IceCube has created a global map of these ice clouds around the planet, which could someday help improve models and forecasts. Credit: NASA Goddard, Jennifer Brill

Looking at Earth from the International Space Station, astronauts see big, white clouds spreading across the planet. They cannot distinguish a gray rain cloud from a puffy white cloud. While satellites can see through many clouds and estimate the liquid precipitation they hold, they cannot see the smaller ice particles that create enormous rain clouds.

An experimental small satellite has filled this void and captured the first global picture of the small frozen particles inside clouds, normally called ice clouds. Deployed from the space station in May 2017, IceCube is testing instruments for their ability to make space-based measurements of the small, frozen crystals that make up ice clouds.

Over the past year, engineers tested the satellite’s limits while on orbit. They wanted to see if the instrument’s batteries stored enough power to run 24 hours. IceCube charges its batteries when the Sun shines on its solar arrays. During the test, although safeguards prevented the satellite from losing all its power and ending the mission, the test was successful. The batteries operated the IceCube all night and recharged during the day. This change made the CubeSat more valuable for science data collection. 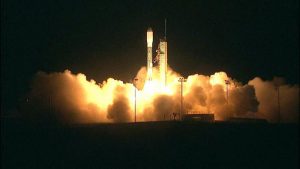 Two educational CubeSat missions were selected through the CubeSat Launch Initiative as part of the 14th installment of NASA’s Educational Launch of Nanosatellites (ELaNa) missions. The ELaNa XIV mission was an auxiliary payload on the Nov. 18, 2017, launch of the Joint Polar Satellite System-1 satellite (now NOAA-20), a collaborative effort between the National Oceanic and Atmospheric Administration (NOAA) and NASA. 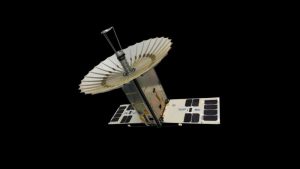 The RainCube 6U CubeSat with fully-deployed antenna.
Credit: NASA JPL-CalTech

When a recent cargo resupply mission to the International Space Station lifted off from NASA Wallops Flight Facility in Virginia, it carried among its supplies and experiments three cereal box-sized satellites that will be used to test and demonstrate the next generation of Earth-observing technology. NASA has been increasing its use of CubeSats to put new technologies in orbit where they can be tested in the harsh environment of space before being used as part of larger satellite missions or constellations of spacecraft. The three CubeSat missions launched on Orbital ATK’s ninth commercial resupply mission represent a broad range of cutting-edge technologies housed in very small packages. 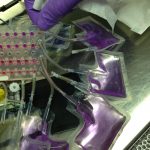 To read more about EcAMSat, see: 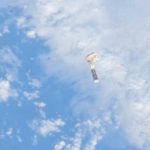 The Technology Educational Satellite, or TechEdSat-6, was released into low-Earth orbit from the NanoRacks platform on Nov. 20, to begin a series of wireless sensor experiments which will be the first self-powered tests, expanding the capabilities of sensor networks for future ascent or re-entry systems. This is the fourth TechEdSat satellite carrying an updated version of the Exo-Brake that will demonstrate guided controlled re-entry of small spacecraft to safely return science experiments from space. 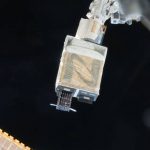 The Dellingr spacecraft right before its release. Photo Credit: Nanoracks

NASA ground controllers have begun checking out and commissioning a shoebox-sized spacecraft that the agency purposely built to show that CubeSat platforms could be cost-effective, reliable, and capable of gathering highly robust science. 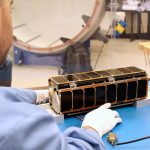 NASA’s Small Spacecraft Technology Program is on the countdown clock to advance communications and proximity maneuvering capabilities for CubeSats with two separate technology demonstration missions. The Optical Communications and Sensor Demonstration (OCSD) mission will showcase the first-ever high-speed data downlink from a CubeSat to a ground station using lasers, in addition to maneuvering the pair of diminutive spacecraft to up-close proximity. Also set for demonstration is the Integrated Solar Array and Reflectarray Antenna (ISARA) mission. A reflectarray is a relatively new type of antenna fabricated from standard printed circuit boards with an array of square copper patches etched on them.

Read more about these CubeSat missions at:
https://www.nasa.gov/spacetech/feature/CubeSat_Missions_Pushing_Boundaries_of_Technology.

Topic 2 (“Advanced Technology Concepts”), solicits ideas for advanced mission concepts advancing compelling astrophysics science and involving SmallSats for which significant investments in instrument and/or spacecraft technologies would be required. Advanced concept missions are defined to be beyond the horizon of near-term solicitations. Such mission concepts are not limited by cost but rather by their realization using small satellites.

The information in response to Topic 1 will be used to inform NASA’s program planning, including consideration of whether to competitively solicit NASA-funded U.S. SmallSats as astrophysics science missions. In addition, the information in response to both Topics 1 and 2 will be used to help craft new topics for future technology solicitations in the Science Mission Directorate and the Space Technology Mission Directorate.

Responses to this RFI may be provided by November 30, 2017 as PDF of no more than 5 pages uploaded via NSPIRES in response to NNH17ZDA010L. For more information about this RFI and detailed instructions on how to respond please see the full text of this call on the NSPIRES web page for this RFI, which may be found by directly downloading theRequest for Information: Possible NASA Astrophysics SmallSats (.PDF) or by going to https://nspires.nasaprs.com/external/solicitations/solicitations!open.do and searching on “NNH17ZDA010L”.

After reading the full text of NNH17ZDA010L, questions may be directed to Dr. Michael R. Garcia atMichael.R.Garcia@nasa.gov (subject line to read “Question on Astrophysics SmallSat RFI”). Responses to all inquiries will be answered via Email and also posted to a FAQ under “Other documents” on the NSPIRES page for this RFI. Anonymity of persons/institutions who submit questions will be preserved. 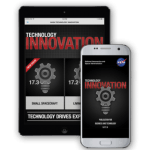 The newest edition of our Technology Innovation app is now available for download in the iTunes and Google Play stores. This digital content can be viewed on iPhones, iPads, or Android platforms as well as on the web:
https://www.nasa.gov/directorates/spacetech/home/innovation_ezine.html. 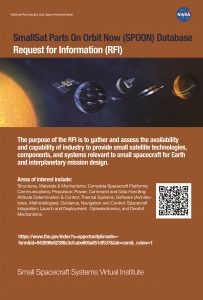 NASA’s Small Spacecraft Systems Virtual Institute (S3VI) announces a Request for Information, the purpose of which is to gather and assess the availability and capability of industry to provide small satellites technologies, components, and systems relevant to small spacecraft for Earth and interplanetary mission design.

In light of strong growth in the use of small spacecraft by US Government, academic, and industry partners, NASA is actively involved across its mission directorates and Centers in all aspects of small spacecraft missions, and is leveraging its capabilities to enable small spacecraft as new innovation tools to achieve Agency goals and objectives. Paramount in this endeavor is advancing clear communication, coordination, and consistent guidance regarding small spacecraft activities, and to provide the US research community access to mission enabling information. 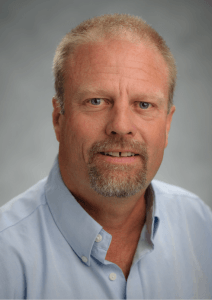 To this end, the Small Spacecraft Systems Virtual Institute (S3VI) was established in January to enhance NASA internal integration and to provide a single point of contact to disseminate mission enabling information and streamlined development approaches for NASA and the research community. Functioning under the auspices of the Space Technology Mission Directorate (STMD) and the Science Mission Directorate (SMD), the S3VI is hosted at the Ames Research Center, with Bruce Yost as the Director. A project manager for Ames’ early small spacecraft missions and a former Small Spacecraft Technology Program manager, Yost and his team will work over the next year to establish both a physical and virtual presence for the S3VI within NASA and the small spacecraft community at large.

The S3VI provides a portal for exchange of information on small spacecraft activities across NASA, among other federal agencies, and with external groups. Over the next several months the S3VI plans to release the first of its federated small spacecraft databases as well as to host an online seminar series open to the public. The S3VI portal may be accessed at https://www.nasa.gov/smallsat-institute.

Click here to view an August 2017 PowerPoint presentation for an S3VI Overview and Update.

Any cookies that may not be particularly necessary for the website to function and is used specifically to collect user personal data via analytics, ads, other embedded contents are termed as non-necessary cookies. It is mandatory to procure user consent prior to running these cookies on your website.

Spanish
If you wish to receive future issues of JoSS and the JoSS Bulletin, please fill out this form and click “Add Me” below.

If you have already subscribed, or wish to skip this step, click here.